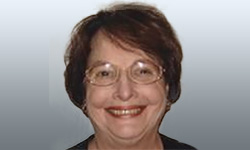 Dr. Sandra Powers, who taught in the UNCG School of Education for more than 30 years, passed away on August 13, 2021. In 1986, as a member of the Interdepartmental Studies Gerontology Program Committee, Sandy coordinated UNCG’s first Gerontology Conference on the topic of Mental Health and Aging. She was the first person to teach GRO 501 Critical Issues in Aging, which was originally the capstone for the undergraduate minor and second major UNCG offered from 1984- 1994. She also established and coordinated the Gerontology Journal Club from 1987-91. This club has since morphed several times and has been called the Gerontology Brown Bag Lunches, the Aging Network, the Gerontology Research Network, and currently, the Gerontology Research Outreach Workforce Development and Teaching Hub (GROWTH). Later, from 1998-1999, she served as the first Director of the UNCG Graduate Program in Gerontology, coordinating the Post-Baccalaureate Certificate during the year the Gerontology Committee was also planning a master’s degree in Gerontology.