The Anterior Cruciate Ligament (ACL)  is the primary stabilizing ligament in the knee. Females are 2-3 times more likely to suffer an anterior cruciate ligament injury compared to similarly trained males in sports that involve landing, cutting and quick change of direction. Sex differences in sport specific movement strategies (i.e. the positions of the knee, hip and trunk when cutting, landing and pivoting) have been studied extensively. 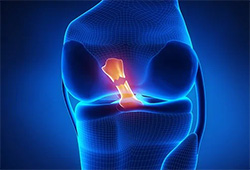 Our research program over the past 22 years has been largely focused on elucidating the sex-specific factors that underlie these higher risk movement patterns in females, and otherwise contribute to their greater risk of suffering an ACL injury. Identifying these underlying factors will allow us to more effectively and directly target our injury prevention efforts and reduce the risk of this disabling injury.

A primary area of study has been to understand the role of knee joint laxity in a female’s increased susceptibility for knee joint trauma. Knee joint laxity defines the ‘looseness’ of the knee joint, or how much the joint displaces under a specific load. As females mature, they deve

Current research efforts focus on furthering our understanding of the key risk factors for ACL injury in females, developing evidence-based screening tools to identify those at risk, and designing therapeutic interventions that have the potential to increase ACL resiliency and the ability to withstand external loading during sport activity.

The Healthy Girls Initiative is an interdisciplinary team of investigators with expertise in developmental processes and mental and physical health outcomes. Our aim is to capture the complexity of the pubertal processes that characterize normative vs. risk development in adolescent girls and determine suitable entry points for mitigating the negative mental and physical health outcomes that reduce quality of life and lead to illness, injury and disease across the lifespan. One aspect of this initiative is to understand the developmental processes that contribute to known physical risk factors for ACL injury in adolescent females (e.g., hormone exposure, higher BMI, greater knee laxity) and determine the best time to intervene on that risk.

There is increasing evidence that females develop smaller ACLs than males (even once accounting for body size), and that smaller ACLs are associated with a greater risk of ACL injury. These differences emerge during maturation, about the same time that sex differences in body composition (with females developing more relative fat mass and less muscle mass compared to males) and ACL injury risk emerge.

Recently, our research has revealed that muscle mass is a stronger determinant of ACL size than other body dimensions, and that in turn, ACL size is a strong determinant of anterior knee laxity. We are currently exploring the potential for a resistance exercise program initiated early in the maturation process to augment muscle development and increase ACL size and resiliency in a young female.

There are many clinical reasons for measuring knee laxity. In the absence of injury, measuring knee laxity can identify those who may be at greater risk for future knee joint injury, and enable timely and effective interventions to mitigate risk before injury occurs. When injury does occur, knee laxity testing can assist with accurate diagnosis of ligament injuries, assessment of ligament integrity post-surgery and during the healing / rehabilitation process, and objective monitoring of joint health over time.

Our overall objective for this project is to develop a commercially viable and clinically friendly instrumented knee arthrometer that accurately measures knee laxity in 3 planes of motion in 5 minutes or less with limited training. In prior funded work, we developed the mechanical aspects of the prototype. We are currently integrating a precision measurement system into the device.

Development of a Dynamic Knee Support for Prevention of Knee Injuries

Knee injuries account for ~50% of all acute musculoskeletal injuries in physically active and military personnel and can result in substantial health care costs and reduced quality of life. Individuals (particularly young females) who have greater knee joint laxity have more difficulty in stabilizing the knee during sport activity and have a greater risk of knee ligament injury. Thus, therapeutic interventions that enhance functional joint stability in those with excessive joint laxity are critically needed from both an injury prevention and rehabilitation standpoint.

The proposed innovation is intended to fulfill this critical need by designing an external knee support to enhance joint protection and ensure safe motion limits are not exceeded during physical activity. When injury does occur, the technology could also be used to protect and support the knee while ligament(s) are healing. The technology can function as a stand-alone protective device but would ideally be used in conjunction with a comprehensive injury prevention or rehabilitation neuromuscular training program designed to increase functional stability of the knee.

We are grateful for the funding sources that have supported this research agenda. 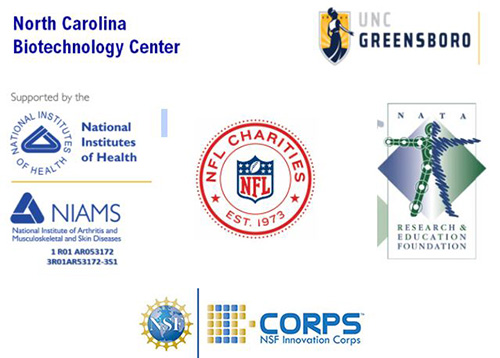