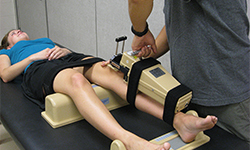 Despite extensive research, we still do not fully understand the biological mechanisms that underlie a female’s increased susceptibility for suffering a non-contact ACL injury.  While sex differences in neuromuscular control are often implicated, prevention efforts addressing these differences have not resulted in a profound or sustainable reduction in injury rates.

Dr. Shultz’s laboratory focused on two likely scenarios that explain this greater susceptibility in females: 1) females have a structurally weaker ligaments that are more prone / susceptible to failure at a given load, or 2) females develop less knee protection and experiences higher relative loads on the ACL.  This has led to studies examining the impact of sex hormones, genetics and sex differences in anatomy on ligament structure and function (Scenario #1), and the impact of greater knee joint laxity on knee joint function during sport (Scenario #2).

While we have learned much over the past 2 decades about ACL injury risk in females, much remains unknown. Continued research is of paramount importance if we are to effectively identify those females who are at greatest risk for injury, and effectively target the appropriate risk factors to reduce their susceptibility to injury.